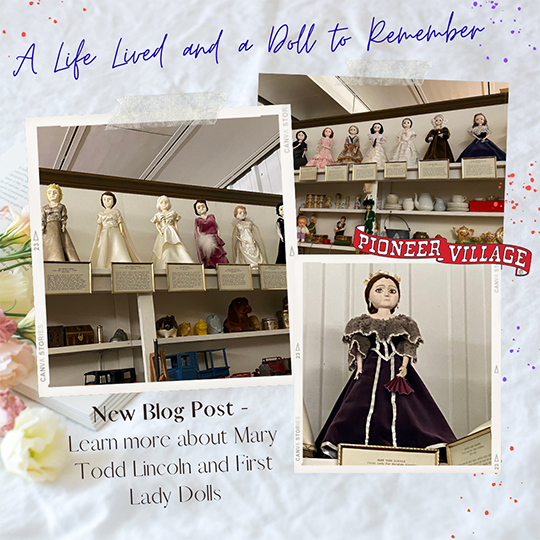 Located in Minden Nebraska, is a historical museum right off the interstate called pioneer village. Here, you can find thousands of historical artifacts, stretching across 28 buildings. Among the artifacts, In the collection of dolls Pioneer Village has, there are several who can be recognized by name. One of whom represents Mary Todd Lincoln, the wife of President Abraham Lincoln and was the 16th First Lady.

According to the website eHistory, Mary’s full name is Mary Ann, however, she went only by Mary because she had a sister named Ann. On December 13, 1818, Mary was born in Lexington, Kentucky (eHistory, n.d.). Resulting of her father being married twice, Mary had 15 siblings, according to the Mary Todd Lincoln House (MTLH Biography, n.d.). Her family also had a lot of money and could afford expensive items (Biography.com, April 1, 2021; eHistory, n.d.).

Mary took her education very seriously. Shelby Female Academy was the school she was enrolled in for five years. At the time, girls were not taught the same amount of material the boys learned, however, Mary was taught more subjects than many girls. Mary continued her education, which was also uncommon at the time. She completed her studies at Shelby Female Academy. The second school she attended was Madame Mentelle’s for Young Ladies. Boarding was an option for students at Madame Mentelle’s. Mary convinced the school to let her board there as well, even though her family lived nearby. Mary’s family had to pay tuition every year for Mary to attend school. Around fifty-two dollars were spent each year for Shelby Female Academy, and one-hundred-twenty dollars was the price for Madame Mentelle’s for Young Ladies. Mary loved to learn and excelled in school (eHistory, n.d.).

According to Biography.com, Abraham and Mary met when they were both in Springfield, Illinois. Elizabeth Edwards, Mary’s sister, lived there and Mary had come to visit. November 4, 1842, was the day of their marriage (Biography.com, April 1, 2021). During their time together they had four children, but only one lived to be an adult (MTLH Timeline, n.d.).

While Mary was the first lady, she visited patients in the hospital and brought them supplies and gifts, according to eHistory. Mary was not afraid to share her thoughts and opinions. The news would often report about her life and how she behaved differently from past First Ladies. Spending money also became a bad habit of hers, but after Abraham discussed the issue with her she became more aware of her spending (eHistory, n.d.). Grief became a difficult struggle Mary experienced due to losing Abraham and three of her sons (MTLH Biography, n.d.; Biography.com, April 1, 2021; eHistory, n.d.).

It is unknown when the Mary Todd Lincoln doll arrived at Pioneer Village. However, in a letter Sister Clara sent to her brother Harold on May 17, 1962, a photo was included with the collection of dolls at the time (Sister Clara’s Letters, p. 369). The Mary Todd Lincoln doll is believed to be in the picture leading us to predict the museum had received the doll before or around the time the photograph was taken and the letter was sent.

Today, many of the dolls collected at Pioneer Village are located inside the Hobby House, building twenty-one (Pioneer Village Website). A set has been made to represent a Toy Store out of the many collectible toys the museum has received (Photo by Marcy Brandt). Dolls can be found interacting with other toys or being displayed on the shelves.

Come make a visit to Pioneer Village to see these wonderful childhood treasures and learn more of the stories each item has to share.