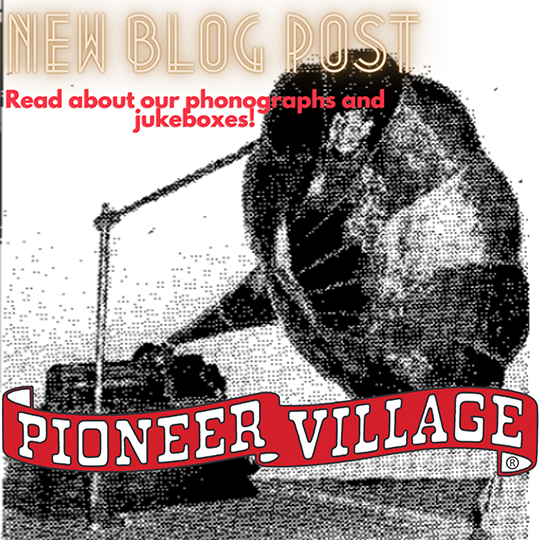 Pioneer Village, Located in Minden, Nebraska is an amazing location to learn about the history of Nebraskan culture in detail. They have an awesome display with a variety of recording and playing devices such as phonographs, radios, and jukeboxes. The history of these items alone are so significant in the development of our social capabilities today. Seeing and learning about these unique developments in history is an opportunity that you do not want to miss out on at Pioneer Village!

The astonishing invention of the phonograph in 1877 by Thomas Edison led to many more fascinating inventions, such as the jukebox in 1889 and the radio. As we all know, these tools have transformed to our current standards in modern years. The phonograph was an early sound-reproducing machine that used cylinders to record as well as reproduce sound. The phonograph was actually developed as a result of Edison’s work on two other inventions, the telegraph and the telephone. One fun fact about this invention is that when Edison originally tested the machine, he spoke the nursery rhyme, “Mary had a little lamb” into the mouthpiece. To his amazement, the machine played back and the patent on the phonograph was issued on February 19, 1878. The invention of the phonograph was highly original. The only other recorded evidence of a similar idea was written about  in a paper by French scientist, Charles Cros on April 18, 1877. The two inventors’ ideas had some differences. However, Cros’s work remained only a theory since he did not produce a working model.

This monumental and original invention is available to be viewed at a location near you: The Harold Warp Pioneer Village! The phonograph along with preceding and following inventions of recording and playing devices are on display with clear descriptions of their origin to The Pioneer Village. In fact, Pioneer Village has documented letters that Clara Warp Jenson would write to her brother Harold that frequently included updates and recent purchases. Many of these letters include information of the initial purchase and arrival of recording and playing devices to Pioneer Village. Clara Warp Jensen wrote a letter to her brother Harold from Minden on October 15, 1953, stating that they got an early dial telephone from Chicago for five dollars. On January 15, 1954, Clara wrote to Harold that she purchased a phonograph on a Vern Nielsen Sale. Clara wrote to her brother again on October 25, 1960, that an Edison phonograph was purchased from a Victor Bergman at Gothenburg, Nebraska for fifteen dollars. Aside from these specific letters, there are many other letters that recognize similar purchases such as an 1894 New England telephone directory on December 13, 1954. There was also a telephone test phone, climbers, and belt that they got put with a dial switch board. They bought the telephone test phone, climbers and belt from a Lloyd Lyne of Lincoln, Nebraska for two dollars and seventy-five cents. All of these amazing, original, and monumental artifacts are available for you to discover for yourself at Pioneer Village!

There is such a large variety of original recording and playing devices at Pioneer Village. The letters from Clara to Harold are unreal in detail and provide so much room for imagination and curiosity. So, unleash your imagination and curiosity of these facts and amazing documented moments in the history of Nebraska, and make a nearby stop at Pioneer Village to see for yourself!