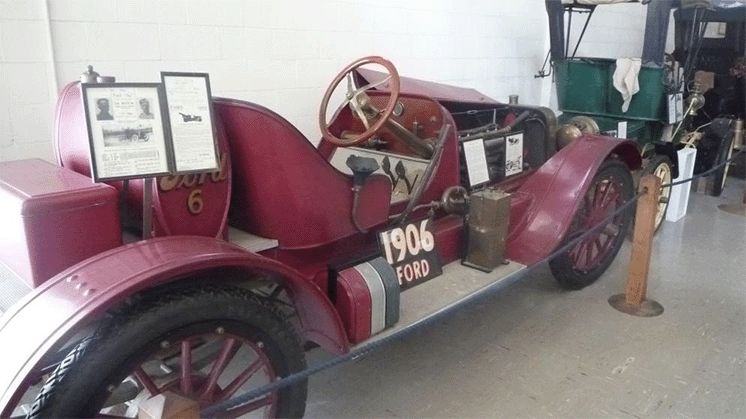 Interested in classic Fords and want to learn more? Come visit this classic Ford Model T and many others at Harold Warp Pioneer Village located in Minden, Nebraska.

The Ford Model T first debuted in 1908 in Detroit, Michigan, and was sold until 1927. The launch of the Model T was different than any other launch before because it was one of the first mass-production vehicles which meant it was available for lots of customers. As mentioned on Ford’s website, Ford Motor Company could sell the vehicle for between $260 and $850 as Henry Ford passed production savings on to his customers.

What’s cool about this is that since the car was so cheap, many people could afford it with 4 to 18 months’ salary. With this amazing price, almost 40 percent of cars sold at that time were Model Ts.

The Model T came with many different variations like two-seat runabouts, five-seat touring, and a seven-seat town car. Its body was mounted in a 100-inch wheelbase chassis. In the beginning, the car was offered in many different colors, however, after 1913, the only color that you could buy was black.

This vehicle also had its engine block and crankcase as one unit. It was made of four cylinders and could detach the cylinder head for easy access and repair. The engine came with 20 horsepower and could reach speeds up to 45 miles per hour. According to Britannica, “In most Models, the engine was started by a hand crank, which activated a magneto connected to the flywheel, but after 1919 some Models were equipped with battery-powered starters.” The car came with a 2-speed transmission with two forward gears and one reverse. The transmission was also smooth. It was a planetary type, controlled by a hand lever.

The Model T had a fuel capacity of 10 gallons. One interesting fact about the Model T is that gasoline was fed to the engine by gravity and reverse gear had more power than forwarding gears. This made a bit of a problem going uphill, so people put it in reverse. The early Models came with a tool kit, packed the gas tank under the front seat, and the option to either have windshield or not because it wasn’t standardized back then. It was also the first to make the lightweight but strong alloy known as vanadium steel.

The Ford Model T also had its unique nickname called “Tin Lizzie.” There are many theories about how this name originated, some say that origins include the popularity of the female name “Lizzie” during that time, some say that it was a generic name given to a horse and was passed on to the Model T.

Ford was already a big automotive back then. As early as 1920, more than half of the registered automobiles in the world were Ford. They sold more than 15 million Model T’s and it ended its era in 1927. Even though this vehicle is more than 100 years old, this vehicle is iconic because it introduced new features at a low cost and revolutionized manufacturing.