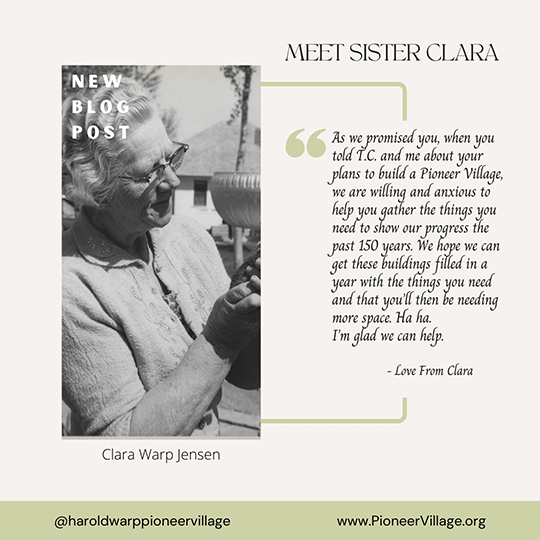 Have you heard of the saying “Heart and Soul”? Collins Dictionary defines it as putting “a great deal of enthusiasm and energy into something”. This saying perfectly represents the Warp sibling duo. Everyone knows that the soul of Pioneer Village is Harold Warp. The place is even named after him. But few know who the heart is behind the soul: his sister Clara. She was an integral part of getting the museum to be the celebration of history that it is today. So here’s her story:

Harold and Clara’s parents were both born in Norway and eventually immigrated to the United States in 1869 (father) and 1878 (mother). They settled into farm life and started raising a family just outside of Minden in Cosmo, Nebraska. Clara G. Warp was born on April 27th, 1894, to parents John and Hilda Warp. Clara was the 10th born. Unfortunately, three of her older siblings had passed at a young age. Her parents went on to have two more children after Clara – the youngest being Harold.

Clara went to the Grom District School – the same school that ended up in the collection at Pioneer Village. She then graduated from Minden High School in 1912 and got into teaching. On June 1st, 1916, Clara G. Warp and Thorvald C. Jensen, were married. He was affectionately known as T.C. Jensen or Col. T.C. Jensen. The new family settled in Holdrege, Nebraska where she was a stay-at-home mother to Vearl, Elaine, Stanley, Omar, Donald, and Ronald. Her husband Thorvald was a public sales auctioneer. Eventually, the family moved to Alma, Nebraska.

Clara was very involved with her church and the community organizations. She belonged to the Woman’s Society of Christian Service, and the Order of Eastern Star. She was also a member of the Minden Woman’s Club and the local China Painting Club.

Clara got into bookkeeping for the livestock sales barns which then evolved into collecting items for her brother Harold. Clara’s husband, Thorvald, played a key role in their adventures as well. His career in auctioneering gave him a special knowledge and advantage of where and how to find items, as well as their pricing. It was only natural, once the idea of Pioneer Village was born, that they would be involved. That, and their natural charisma allowed them to make many friends along the way who would share information with them or forward their information on to others.

Clara flexed her bookkeeping muscles by keeping a diligent record of all the items bought and their associated costs which she later forwarded onto her brother Harold for reimbursement. Considering the times, and the expense of long-distance phone calls, Clara and her husband kept communication open with Harold by writing daily letters.

All those letters can be found in her book “Sister Clara’s Letters While Putting Together the Harold Warp Pioneer Village”. Rarely, if ever, do you get the full backstory or personal touch behind how an item was acquired at museums. Usually, it just says “donated by” or nothing at all. Her book is a unique perspective on the process and shows, in a quite personal and honest way, how much work went into it.

Later in life, she, and her husband T.C., became co-managers of Pioneer Village. She worked for Pioneer Village for over 12 years, and probably would have many more. Sadly, Clara passed away December 23rd, 1962 of a heart attack. Preceded in death by her son Ronald. 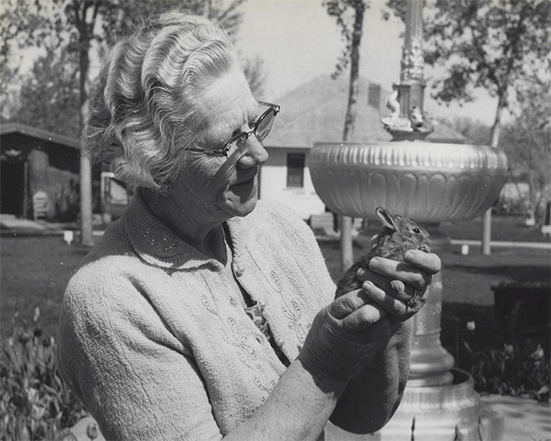