The History of the Bicycle 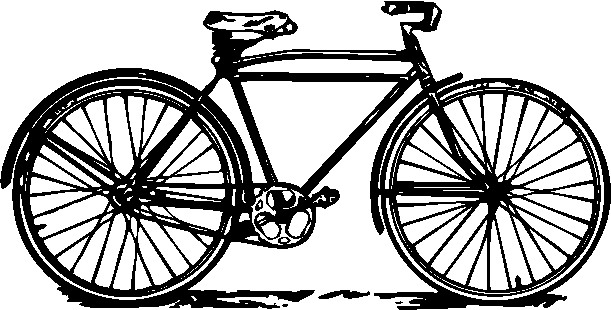 Part of the Bicycles, Motorcycles, and Scooters Display at Harold Warp Pioneer Village in Minden, Nebraska

1816, The Hobby Horse, a steerable two-wheeler

Did you know the invention of the first bicycle may have been because of a volcano eruption? The eruption in Indonesia in 1815 was so powerful that it drastically changed the weather around the globe for several years. The next year, 1816, came to be called “The Year Without a Summer” because temperatures were much colder than normal. During this time, a German Baron, named Karl von Drais created a two-wheeler to increase walking speed. This may have been because it was too expensive and difficult for people to grow enough grain to feed their horses and he wanted a faster way to travel without riding a horse.

He called his invention a laufmaschine, which translates to “running machine” in German. He also gave it the name “velocipede” when he began to market it in France. It resembled a horse, and eventually earned the nickname “hobby horse.” Riders had to power it by pushing their feet against the ground, as if they were running. Pioneer Village has a beautiful example of a carved and painted hobby horse in the bicycle section of the exhibit. It was put on display in February of 1953.

1862, The Velocipede, the first bicycle with pedals

Harold Warp bought a bicycle similar to the velocipede on January 8, 1952, when he was in Indiana. Frenchman, Pierre Lallement was credited with adding pedals to the front wheel of a hobby horse. He moved to Connecticut in 1866 and filed a patent for this innovation. The velocipede earned the nickname “Bone-Shaker” because of how jarring it was to ride on cobblestone streets. There weren’t brakes on bicycles before this time and it was common for riders to crash and take a “header” if they had been traveling too fast! Brake shoes were added in 1869 and allowed the rider to slow down and stop by twisting their handlebars.

Harold Warp’s sister, Clara Warp-Jensen and brother-in-law, T.C. Jensen purchased one high-wheel bicycle for 25 dollars in January of 1951, and one for 15 dollars on October 17, 1959. Clara received another high wheel bicycle, which she described as The First High-Wheel Bicycle in Charleston, South Carolina on November 11, 1961. Harold purchased this one for 250 dollars.

The word bicycle had not been coined until the 1870s when the “Ordinary Bicycle” was invented. These came to be called rubber-tired high wheelers, and over 3 million of these bicycles were sold in the 1890s! The large front wheel meant that riders could gain more speed with the same amount of effort. When a solid rubber tire was added to the high wheeler, it made the ride a little bit smoother. These bicycles were dangerous to ride and difficult to mount and dismount because the seat was so high.

1888, Invention of the Pneumatic Tire

John Boyd Dunlop’s 10-year-old son told him it was painful to ride his tricycle with iron rims on cobbled streets. His tricycle did not have the solid rubber tires like the high-wheelers, but Dunlop created something even better. He put one rubber tube inside another, added a valve, and created the first pneumatic tire. This dramatically changed bicycle wheels and made it much more comfortable to ride a bicycle. This very first pneumatic tire was tied to the wheel, but when these tires were manufactured, they were glued to the rim. When a tire went flat, it was expensive and time-consuming to change. In 1891, the Michelin brothers created a removable, demountable tire that made it fast and easy to fix a flat.

You can finally begin to see the more familiar frames of modern bicycles appear in the designs of bicycles from the 1880s and 1890s. The Safety Bike had smaller wheels than the large front tires of high-wheelers, but it was still efficient to ride because it introduced a chain drive and sprockets to create a 15-1 gear ratio. These innovations and the addition of pneumatic tires added to the speed and comfort of riding these bicycles. The Ladies Bicycle was created in the 1890s and the shape of the frame was changed to have a much lower crossbar. This made it easier for women to ride, even while wearing a skirt.

Shaft-drive bicycles are rare to see today, but they were an alternative to chain drives and were very efficient if properly manufactured and maintained. Harold Warp wrote that shaft drives inspired early automakers and even the Wright Brothers, who built bicycles before they built their motor-operated Wright Flyer in 1903!

Clara and T.C. purchased an 1890 Tandem Bicycle in December of 1957, while traveling home from a trip to New England. Even though they had filled a train car with purchases on the east coast, they continued to find treasures to bring home in their station wagon and an attached trailer. The tandem bike just barely fit in the station wagon when they took the front wheel off. Clara wrote that she was “cozy” and the station wagon seats were filled all the way to the roof!

Brave (or foolish) cyclists raced high-wheeled bicycles in the 1870s. The improvements over the final 30 years of the 1800s including safety bikes, the addition of chain drives and sprockets, and better tires made racing even more popular in the early 1900s and beyond.

Harold Warp wrote about the bicycles at Pioneer Village in his book, A History of Man’s Progress from 1830 to the Present. He also received letters from his sister Clara Warp-Jensen, his brother-in-law T.C. Jensen, and others whenever they purchased items or made progress on projects at the Pioneer Village site. These were collected by Harold in another book titled Sister Clara’s Letters.

The bicycle, motorcycle, and scooter exhibit is one just one section of over 50,000 historical items on display at the Harold Warp Pioneer Village. Come visit us in Minden, Nebraska to see the rest!