The Man Behind the Village 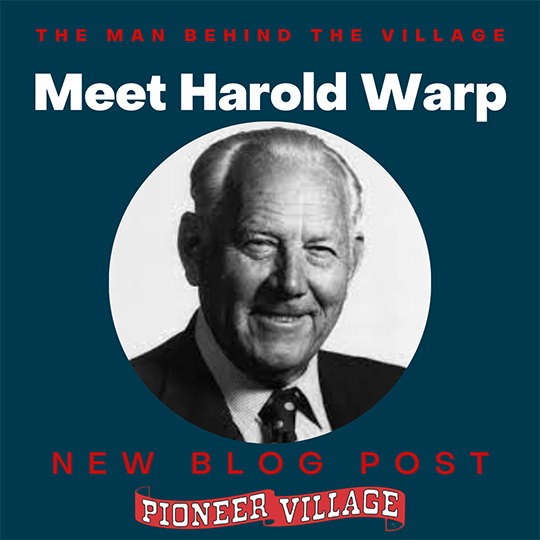 When Harold Warp was born in a sod house in Minden, Nebraska in 1903, no one knew what the future would hold for him. Harold was the youngest of 12 kids. Little did his parents  know that he would grow to be a successful entrepreneur and would collect thousands of treasures for the world to enjoy with his creation of Pioneer Village .By age 11, Warp had lost both of his parents and was sent to live in various households until high school when he moved in with an older brother in Chicago. Despite a challenging childhood, Warp was a curious, inventive, and intelligent student. One of his earliest successes involved creating a cookbook for his home economics teacher in high school that he sold by mail order.

His success story started when he noticed that the Summer yielded more growth and eggs from chickens than Winter due to chicken coop’s windows that did not allow the sun’s warmth into the building. This led him to three years of experimentation and ended with Warp creating Flex-O-Glass! This was a revolutionary, flexible material that could be added to chicken coops to give the chickens the illusion of Summer by allowing the sun’s warmth to enter the room. While in Chicago, Warp used his savings to create a factory for Flex-O-Glass and found great success with the material after the government approved of it. Warp’s plastic businesses grew to include several other products and the Warp Bros. company was founded and is still in business today.

Harold Warp took his success in the plastics businesses and brought it home to Minden, Nebraska. It was there that he purchased the town’s one room schoolhouse, church, and train depot, along with several others and the dream of Pioneer Village was born. Harold moved several buildings to form a new “town square” and opened his attraction in 1953. A notable building is a replica of the sod house in which he was born just feet away from the oldest merry-go-round in America. Along with historic Minden buildings, Harold Warp packed his land with over 50,000 historically significant items. Pioneer Village grew to hold everything from cars to antique fire extinguishers and art. Harold Warp’s dream came true and many visitors from around the nation came to Nebraska to see the historical masterpieces he had preserved. Warp was a lifelong learner who dedicated his time and money into helping Americans continue their education into the past.

Harold Warp was a respected business owner and citizen in Nebraska and beyond. Before his death in 1994, he was the recipient of numerous awards including the 1979 Horatio Alger Award and the 1984 Distinguished Nebraskalander Award. He was selected for these awards based on his commitment to leadership, community service, excellence, and the belief that everyone can achieve a better future. In 1983, Harold Warp donated his museum to the nonprofit Harold Warp Pioneer Village Foundation. Although Harold is no longer with us, his legacy will not be forgotten. His contributions to historical preservations at Pioneer Village and beyond as well as his innovations in the plastics industry will continue to benefit and educate the world forever.