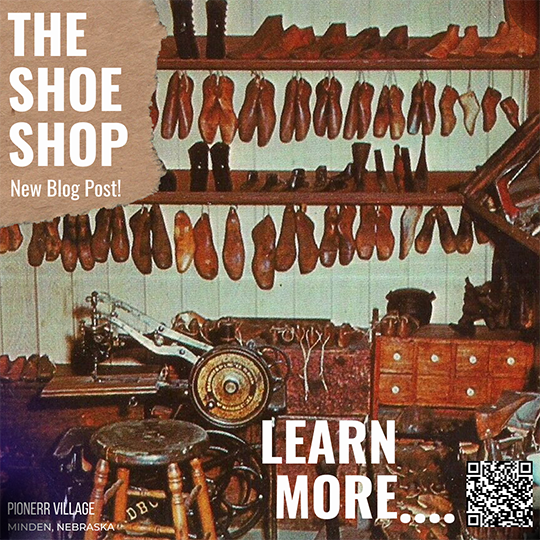 The Shoe Shop that is now in Pioneer Village was once operated by a father and son pair in New England from 1840 to 1880. They had quite the process to make their shoes. It started by getting animal hides from local farmers. Then, they took the hides back to their shoe shop and sat at a low bench that served as their workstation. The tools used by the shoemakers were practically the same tools that ancient Egyptian sandal makers used: a lapping stone, hammer, crude needle, and knife. The knife was the shoemaker’s best friend as it was used to cut fabric and build the structure of the shoes to the form. The needle was used for the precision needed to make a shoe. The whole process was unpleasant and daunting, taking eight to ten hours to finish each pair of shoes.

Once multiple pairs of shoes were finished, the shoemakers went back out to the country to sell their final products to people. Then, they got more animal hides from local farmers to start the process all over again.

In the year 1845, the first machine to be widely adopted by the industry was introduced. It was a simple form of a rolling machine, which took the place of the lapping stone and hammer used by the shoemakers for toughening the leather. This machine saved shoemakers about thirty minutes of hammering and flattening out leather because it could do the job in one minute.

If you come to visit the Shoe Shop at Pioneer Village, you will see that all the shoe forms were the same. Before 1865 there were no right and left shoes. Two different shoes for each foot were made for soldiers in the Civil War and became popular for the public as well then. So come check it out for yourself!