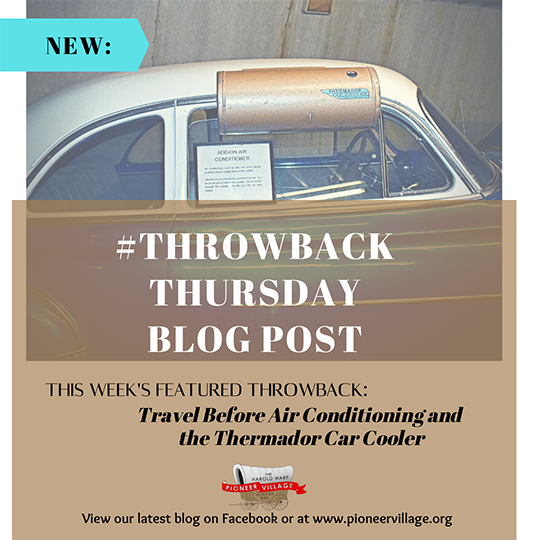 Think back to your favorite summer road trip and the fun memories you have in the car. Now, imagine taking that same trip but there is no air conditioning or fan system in your car. That was the reality of car travel between 1908 when Ford launched their first Model T car and the 1930s when cooling systems were introduced. Until the 1930s, cars having cooling systems was unheard of. As auto technology had begun to progress, an innovative company called Thermador got the idea for a car cooler. Thermador Car Cooler was invented in the 1930s, gaining popularity in the west coast. Car coolers became widely available in auto supply stores during their peak in the 1950s.

Thermador Car Cooler was one of the first auto air cooling devices. The hole on the top right is where car owners would pour cold or icy water into the Thermador. On the inside of the car there is a rope you pull to dampen a sponge with the cold water. Then, once the car was moving, air would travel through the front of the AC attachment and be streamed into the car. Periodically, as the sponge dried, the car owner would need to pull the rope to re-saturate the sponge which helps cool the air coming in. Since this technology relied on moisture to cool the car, it was typically only an effective car cooler in drier landscapes. In a popular TikTok featured below, @theetravisb shows how the car cooler works.

Now, relate that to today where every car has an A/C and heater built into it. The conveniences that automobiles have built-in today are often taken for granted. It is always so interesting to take a look into the past at where our current standards come from. It makes you appreciate the small things a little more, realizing there once was a time where air conditioning wasn’t a universal standard for a car to have.

Harold Warp Pioneer Village in Minden, NE is a great weekend trip idea. The village features both the Ford Model T car as well as a Thermador Car Cooler along with so much more. Pioneer Village is a 20 acre historical village featuring 20 different historical buildings, over 50,000 artifacts, and many other unique pieces of history. They also have a camp ground and a motel on the property for you to enjoy your stay and immerse yourself in history. The museum is located in Central Nebraska just 12 miles south of I-80 from Exit 279.

Harold Warp the founder of Pioneer Village and his family have spent decades collecting pieces of history that reflected on the progress of man. The Warp family believed in the importance of looking back at the past and saw a lot of value in observing  man’s progression. The importance of understanding where we came from and how we have advanced over the years is one of the reasons why he opened the Harold Warp Pioneer Village in Minden, NE.