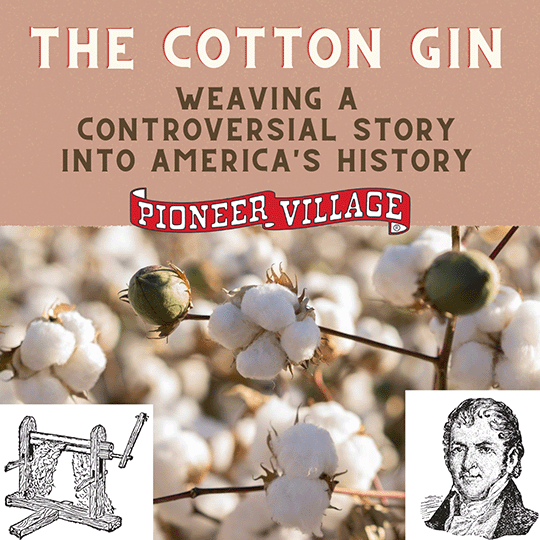 The cotton gin is a widely known device and was once a staple of southern homes. But what does it do? And how has the invention of the device changed the course of our history?

What is a Cotton Gin?

The cotton gin, the word “gin” short for “engine,” works like a strainer. A contraption of hooks drags the cotton fibers through mesh, which filters out the sticky seeds in the cotton. The hooks then pull through the mesh containing the cotton fibers alone. On display at Harold Warp Pioneer Village is a hand-cranked gin from Greenville, Tennessee, but larger gins would be powered by horse or steam engine. A hand-held gin alone could prepare 50 pounds of cotton in a single day, a huge increase from the average amount of cotton cleaned in the past, at just one pound a day. It often sat near the fireplace and next to the spinning wheel, hanker, and hand loom, all used in combination to make yarn and weave it into a final product.

Who Invented the Cotton Gin?

Eli Whitney, a Yale-graduate who moved from Massachusetts to Georgia in 1792, invented the cotton gin within months of moving, backed by the guidance and finances of his neighbors, Catherine Greene and Phineas Miller. He noticed that it was much more difficult to manually pull out the seeds in short-staple cotton. The easier-to-clean, long staple cotton could only be grown along the coast. Aiming to get rich with his invention, he succeeded in patenting the gin in 1794. His plans did not pan out as hoped. Most farmers copied his invention, and the lawsuits brought against thieves of his idea were to no avail. Eventually, him and his partners sold the rights to the patent to South Carolina, North Carolina, and Tennessee.

How has the Cotton Gin Changed History?

The cotton gin, while an extremely effective device, caused controversial effects that Whitney could not have possibly foreseen. It transformed the United States economy by causing cotton to become very profitable. Production doubled each decade after 1800, and it became America’s number one export; the U.S. supplied roughly 75 percent of the world’s cotton. The rise of cotton production created a double-edge-sword: with it came the rapid rise in slavery. Rising demand for cotton brought a rising demand for slaves. About 25 years after the invention of the gin, nations became increasingly divided between the northern and southern regions based on whether slavery was legal in the areas. Between 1790 and 1860, an additional eleven states became slave states in the nation, and about one in three Southerners was a slave. It is still thought by many today that the cotton gin was one of the most impactful inventions that contributed to the institutionalization of slavery and the following onset of Civil War.

Whitney’s invention of the cotton gin led to the rise of King Cotton, where the South believed slavery was necessary as cotton was essentially the backbone of the southern economy.